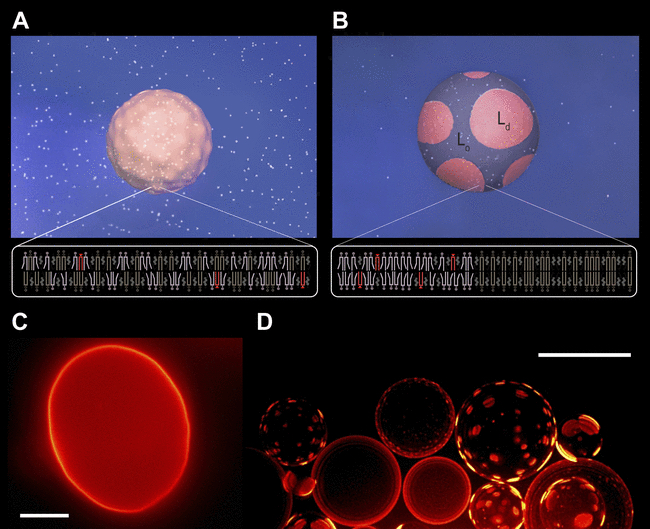 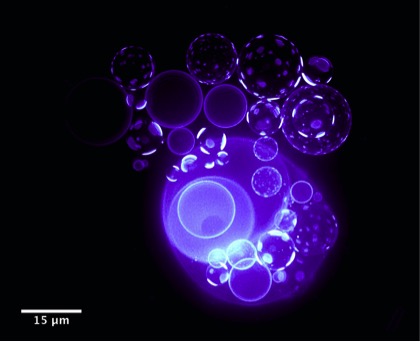 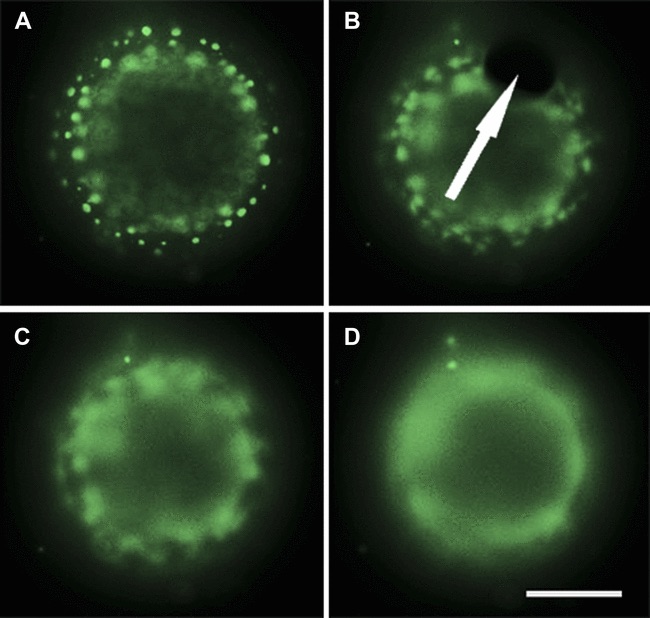 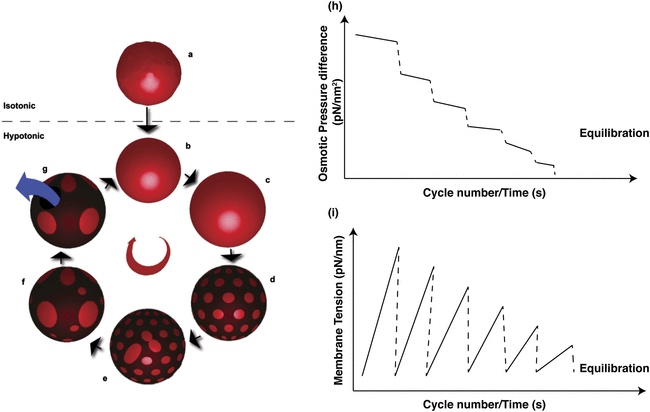 Osmosensing and Osmoregulation in Giant Vesicles

In the constant struggle with the environment, free-living cells of contemporary organisms employ a variety of highly sophisticated molecular mechanisms to deal with sudden changes in their surroundings. One such environmental assault is linked to sudden drop in the amount of dissolved molecules in water (including fluctuations in salinity, freezing, or dessication), which bathes the cell. If unchecked, this perturbation would result in a rapid flow of water into the cell through osmosis, causing it to swell, rupture, and die. To avoid this catastrophic response, even single bacterial cells have evolved a complex molecular machinary, called mechanosensitive channel proteins, which allows it to release the excess water from the cell. But how might primitive cells near the dawn of life on Earth – lacking such advanced, protein machines – have responded to such environmental insults?

In a recent study, we have used giant vesicles to investigate how a rudimentary cell, devoid of proteins and complex cytoplasmic milieu, respond to sudden drop in the amount of dissolved molecules (i.e., sugar) in water. Using a primitive cell-like system, consisting only of three-component mixtures of lipids, we find that these vesicular compartments dissipate osmotic energy by reorganizing the molecules at the membrane boundary and opening a pore, which allows it to release dissolved molecules and lose excess water from the interior thus decrease the pressure of the encapsulated cargo. It is known that this action of this “pressure-release valve” is not all-or-nothing. The valve (or hole) opens for a short period of time – typically of millisecond time scales – releasing some of the internal sugar several times producing a pulsating, breathing pattern in size. Our observations that these swell-burst cycles become coupled with membrane's compositional complexities - reflecting a well-choreographed interplay of a number of well-understood biophysical mechanisms -might help unravel how osmotic perturbations are sensed and ultimately dissipated such as through actions of conformationally activated ion-channels. However, this proposition remains unverified.

From the vantage of materials science, this autonomous, self-regulating capability of simple vesicles – in which an external osmotic perturbation is managed by a co-ordinated and cyclical sequence of physical mechanisms allowing vesicles to sense (by domain formation) and regulate (by solute efflux) their local environment in a negative feedback loop – suggests a primitive form of a quasi-homeostatic regulation in a synthetic material system, i.e., a simple microemulsion produced from simple components, namely, lipids, water, and sugar.

It is possible that this process, involving the coupling of out-of-plane water movement with in-plane membrane reorganization and pore formation, may have helped the first primitive cells -- living billions of years ago-- to survive and, maybe, even benefit from changes in their environment. It is also possible that this mechanism can be used in modern biotechnologies where primitive cell-like entities can be used to deliver their cargo contents at specific sites – either in vivo in biomedical applications or in vitro in technological applications – by exploiting the osmotic valve.

We are currently examining how osmotic relaxation across topologically closed membrane compartments affect activities of membrane proteins and reactivities of encapsulated cargo.